Photo by cottonbro from Pexels

Once upon a time, no one got skin cancer – some people also believed that the Earth was flat.

You may think leading off with such a sarcastic remark is inappropriate, but when you need to share something ominous that doesn’t look ominous, painful that doesn’t look painful, and as life threatening as skin cancer is, you open with a shocker.

Patience Is a Virtue, So Skin Cancer Must Be Virtuous (Um, Nope)

When thinking about cancer, most people rarely give it a thought until it touches them or someone they love directly. Before that awareness occurs, skin cancer is invisible, theoretical, and a scare tactic advertisers use to prevent young people from tanning outdoors or in without sunscreen. In 2017, my own bout with basal cell carcinoma (BCC) – the friendliest, or at least most curable form of skin cancer – revealed that not only is sunscreen worth applying but that cancer is patient. Spoiler: What you do today might not be of much consequence now, but it may find you down the road and kick your ass. 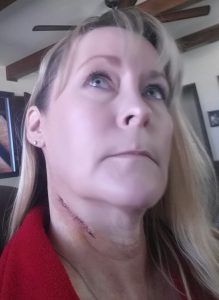 Getting Up Close, Personal, and Too Comfortable

After my BCC surgery, I became a pro at performing my own skin checks and faithfully dropping trow in front of my gorgeous physician’s assistant at my yearly follow-up appointments. After multiple biopsies on most of my toes and other public and private parts (T and A, baby) as well as the associated suture removal procedures (and the 14 days in between where my brain went completely batty), I remained cancer-free … for slightly more than two years. 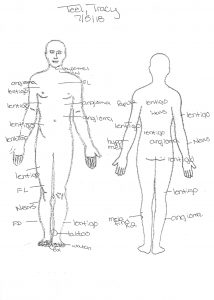 During a full-body skin check, your dermatologist literally maps every marking on your body from head to toe.

In August 2019, the “snakebite” mole twins we’d “watched” in 2017 and scanned with the MelaFind in 2018 looked distressingly more ominous to Claudia when viewed through her DermLite dermatoscope. “I don’t like this one,” she said, “it’s coming off.” 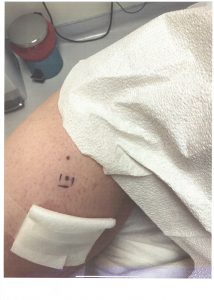 Pre-biopsy photo – mole is smaller than the tip of a cotton swab, uniformly dark, and flat

Since my PA did a punch biopsy on one mole but left the other behind, I didn’t worry until her office called to schedule an immediate appointment WITHOUT giving me my results over the phone. Spoiler: They will never tell you that you have cancer over the phone.

As I sat waiting in that cold, familiar room the next afternoon with a tri-fold brochure from the information rack in my hand, the words MALIGNANT MELANOMA facing outward, Claudia entered, nodded, and all hell broke loose.

After a biopsy, a pathology lab reports the findings back to your doctor. My 5mm punch biopsy report included the words, “Malignant melanoma with extension to the papillary dermis, Clark’s Level II,” “atypical,” and “abundant,” but seeing this sentence was where real became really scary: “cells within the nests have lost cohesion.”

I learned from Claudia and more than a little research that Clark’s staging measures the depth of the melanoma. In my case, the biopsy showed that the cancer had spread vertically beyond the upper layer of the skin (the epidermis) into the papillary dermis (top of the dermis). “Not too bad,” said my brain. “Stage two out of a possible five.”

But here’s something you should know – the Clark staging method, while still commonly utilized by pathology testing facilities is outdated. The American Joint Committee on Cancer (AJCC) staging system is the most current method of staging skin cancer. In people-speak, AJCC considers the “tumor, node, metastasis (TMN) scores and other prognostic factors” when assigning a stage. 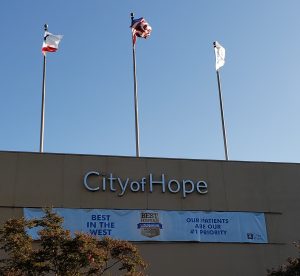 City of Hope is the best!

Wide-Awake with K-Pop In the Background

Nine days after meeting with an oncological surgeon at City of Hope, I was scheduled for a wide local excision under local sedation. Most patients prefer general sedation because they’re asleep during the procedure, but I opted to remain awake because I’m stubborn and cheap and didn’t want to hire a private driver or burden a friend with chauffeuring me around since my husband can no longer drive due to MS. FYI: Go with the general! Anesthetizing more than a half inch below the skin’s surface requires a truckload of drug, and it hurt worse than anything I’ve experienced in my entire life.

Why is this bandage so big?

A 45-Minute Procedure Turned Into 90

Once the anesthesia kicked in, the team and I had a delightful conversation about BTS, BLACKPINK, and EXO. This is the only upside to being awake during surgery; they let you pick the music. As my surgeon worked, the scope of the surgery changed slightly, requiring deeper tissue removal, which is why I now have a small depression in the center of my scar. My leg was crazy numb (thankfully), and I had a prescription for hydrocodone (Norco), which I took until the bottle was empty. This f*cker hurt for a solid week! 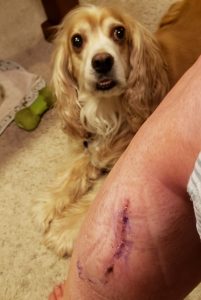 Even Sandy looks frightened by the aftermath!

Some Dos and Don’ts That You Should Consider

Once you’ve been diagnosed with melanoma, you need frequent follow-up checks. I now see Claudia every 90 days and must do so through October 2022. For the three years after that (October 2025), I’ll still need to have a skin check every six months.

Since the day of the surgery, I’ve had 13 additional biopsies, an extra excision after one biopsy came back pre-melanoma, and all cells were deemed atypical but with clear margins around them. Hearing those two words – “clear margins” – feels (I imagine) like being blessed by the pope.

With every breath I take, I want you to avoid this process. You can do that by: 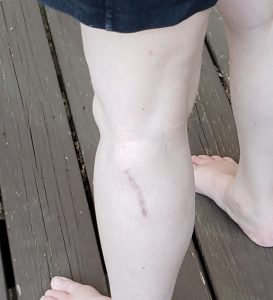 Thanks for wading through the entire story. If you have questions, please leave a comment or follow me on either of my Beautytap profiles. Visit the American Cancer Society’s page to see images of different types of skin cancer, and make a skin check appointment no matter what condition your skin is in. Sometimes, the most benign-looking spot can be deadly.